ACCIONA Agua’s award-winning Tampa Desalination Plant is the largest of its kind in the U.S. After three years of intense redesign and renovation, ACCIONA Agua and its partner, American Water, introduced a modernized and fully automated plant that can produce a maximum of 28.8 million gallons (108,000 cubic meters) per day of potable water and provide for 10 percent of the drinking water needs for the people of the Tampa Bay region. In line with its develop, build and operate strategy, ACCIONA Agua was involved in every phase of the project and will maintain that commitment by managing the plant with its partner for years to come.

ACCIONA Agua is an industry leader in the development of sustainable water resources.  But there were earlier pioneers that tapped some of the fundamental concepts that are solving modern-day challenges of declining reliable water supply. In ancient times, travelers aboard ships distilled seawater to convert it to drinking water. Today, ACCIONA Agua uses seawater reverse osmosis membranes desalination technology, which removes salt and other impurities from seawater, making it suitable for human consumption. At the Tampa Bay plant, reverse osmosis desalination technology moves water from Tampa Bay and the Gulf of Mexico.

The plant uses about 44 million gallons per day (mgd) of seawater from a nearby power plant’s cooling system, which is pretreated with sand filters and a diatomaceous earth filtration system to remove particles. Reverse osmosis filters then separate 25 mgd of freshwater from the seawater. The unused concentrated seawater is diluted with up to 1.4 billion gallons of cooling water before it is discharged to the bay and that dilution is why environmental studies show no measurable salinity change in Tampa Bay related to plant production. Protecting the environment was a big concern for Tampa Bay Water and its two partners on this project. The plant was built to meet the stringent U.S. environmental regulations and overcame the challenges they presented.

The Tampa Bay Seawater Desalination Plant is now fully operational, has produced more than 6 billion gallons of clean drinking water from the sea and is designed to deliver a drought-proof, environmentally sound water supply.

The Tampa Bay project is but one of ACCIONA Agua’s 70 reference plants in the sector with a total installed capacity of over 1.6 million cubic meters per day.

Why we did this project

The Tampa Bay region has always relied on natural sources to meet its drinking water needs. As a result of a growing population and declining rainfall in the mid 1990’s, it became clear that new sources of drinking water were necessary to meet the needs of this growing region. Enter the desalination plant, which sends millions of gallons of drinking water to Tampa Bay residents every day.

The Tampa Bay Desalination Plant was developed to ensure it sustains Tampa Bay residents with alternative water resources and to relieve the potential for over extraction of groundwater resources, which historically have lead to depleted riparian resources and sink holes. The facility captures and recycles its own water pressure, which can then be used as an energy source using energy recovery devices and is able to produce water at far less than a penny per gallon. The facility’s treatment technology operates in accordance with the State of Florida Department of Environmental Protection and local regulations. Such practices make the Tampa plant efficient and built to last, endowing it with an expected lifespan of 30 to 50 years and the ability to accommodate future expansion of up to 35 million gallons per day.

“I like to refer to the desal plant as our secret weapon. It’s there when nothing else is … We should all sleep better at night because of it. I know I do.”
—Susan Latvala, a Pinellas County Commissioner and Tampa Bay Water Board Chairwoman

“This project is significant to ACCIONA  Agua because it is our first project in the U.S. and because it has been the best opportunity to share with [Tampa Bay Water] our technology and desalination experience designing, building and operating desalination facilities during more than 30 years. It is significant to our partnership with American Water because the project demonstrates the successful cooperative efforts of the construction teams from both companies.”
—Luis Castilla, General Director of ACCIONA Agua 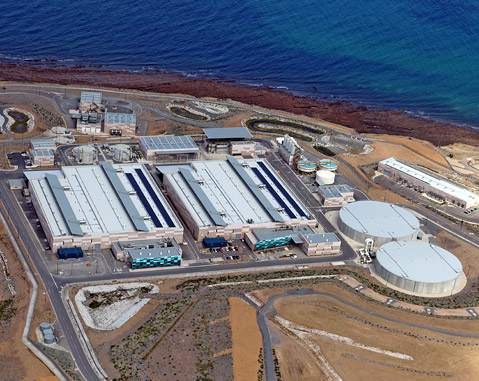 The desalination project is a key part of the South Australian government’s Water Proofing Adelaide Strategy. It provides Adelaide with half of its annual water usage and is powered by sustainable energy sources.

The first desalination plant which will extract water from the Thames Estuary using reverse osmosis membranes.